This is the LEPIN 20007 – Motorized Excavator Real Reviews from our lovely customer nickname Stephan Fuchs at Germany.

Since this is a replica of a Lego model I will not go into more detail here, but focus more on the differences between the sets.

The Lego model has its own instructions in portrait format for each of the three construction sections. Lepin packs all the sections into a 126-page book in landscape format. The Lego instructions Lepin missing the list of tees and the logos have been adjusted, otherwise, the steps correspond to the Lego instructions.
In the middle of the book was still a note (A5) with part of the instructions in Chinese. The steps pictured there are also in the normal guide, n / a why this was. 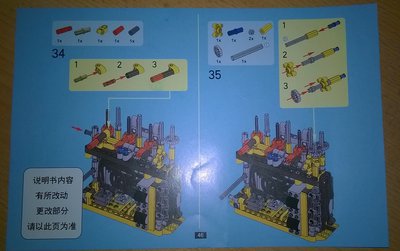 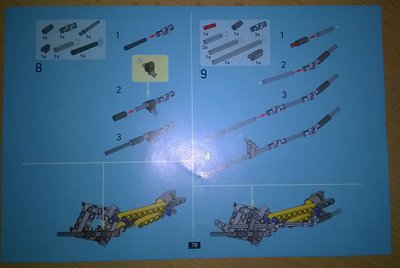 As with the Lego model, there are also for the Lepin model stickers, the print is high quality and so far without blemish. Instead of the Lego logo, TECHNIC, and the Lego set number, there are the Lepin pedants. As the Lego model looks like I do not know, I suspect the background color (yellow) fits there to the stones, with Lepin is the more orange.

On the picture above you can see one of the other differences to the Lego model: 2 of the 4 actuators are equipped with springs. This is apparently not an isolated case, with reviews on YT are also available. In the guide, but nothing to see where to go. As on YT, I used those for raising/lowering the arm. Completely collapsed the path shortens by ~ 1cm, so the arm does not come rounder to ground level.
When I got the model was the first test of the PF on the plan. I was already sweating as one engine after the other did not want to run on the battery box. With interposed receivers but all 4 M engines worked.
Speaking of engines: 3 of the 4 engines work normally, the 4th weakens significantly. I used it to switch gears, and he’s having a lot of trouble. I’ll open it may be times and see what’s going on inside and/or replace the M engine, which was too much in my 20011 model.

Although all parts seem colorless and formally faultless so far, there are some shortcomings: Especially the cross-axis connector 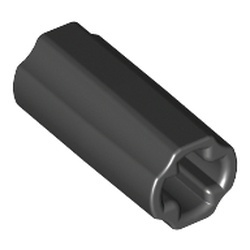 is problematic. The axles cannot be fully inserted (there is often still a millimeter missing), which means that the mechanics are too tight and difficult to move. 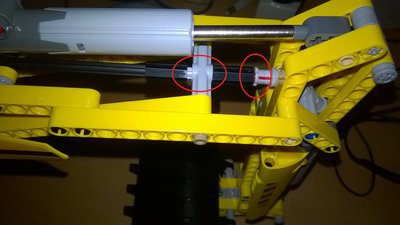 For the drive, I even had 4 Axle Pins

shorten by 1mm so that they fit right in there:

The following should be the same as the Lego model: 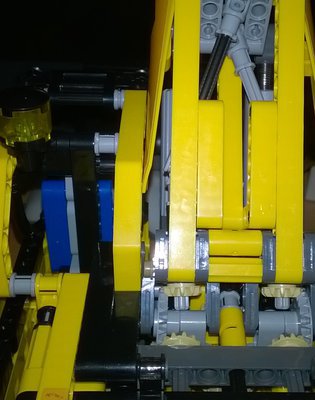 The paneling of the arm reaches to the driver’s cab and likes to hang when lowering the arm.

To make it short: the model can drive. But especially due to the problems with the axle connectors, the mechanics of the arm are so sluggish that the motors do not or only with great difficulty manage to move them.

This time I was not immune to missing parts. In total there are 3 parts too few:
1x each:

and a remote control

There should be 2 remote controls, but only one was included. I will not open a keg at LEPINLand. I still have 3 remote controls from the 20011 that I can use here on, but it is annoying somewhere already.