This is the LEPIN [] 16016 “The Flying Dutchman” by Worian_Flayne Real Reviews from our lovely customer nickname Wolfgang Koch at Germany. 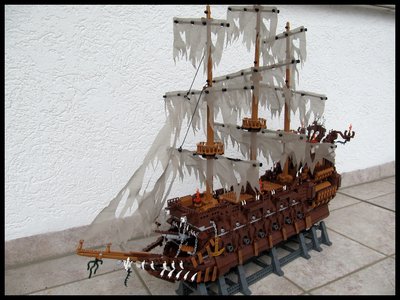 Many people have requested a review and in addition to my enthusiasm for the set, there is also a lot of criticism, which is why I decided to write a detailed review.

One thing in advance: I have not yet built the figures, I will definitely do that and then add the text here.

Construction reports with many pictures of the assembly are here in the forum so fully in vogue, I’m there but old-fashioned and rather recession prefer the finished model, but then tell in plain text form how the building has been designed.

The “Flying Dutchman” (here abbreviated to FD) is a sailing ship, known from “Pirates of the Caribbean” Part 2 and 3, but also in the 5th part of the ship comes shortly. Captain of the ship is initially Davy Jones, but for more background story you should google just google.

LEPIN’s Flying Dutchman is a “personal design” by LEPIN and unfortunately, the designer himself is impossible to find. In any case, this time no poor little MOCer was stolen for his guidance, so for once, you can not make LEPIN a plagiarism reproach.

Before I come to the model itself, I first want to revolt over the structure. “Outrage” may be a bit over the top because most of the time, the model is fluid and easy to assemble in one go. But here and there you are really desperate because the instructions are either too vague or a phase simply does not make sense and is physically not feasible.
I’m just saying page 134, I actually sat there for 1.5 hours and tried it out how to do what LEPIN wants out of you. Because here it looks simple in the manual, in the implementation but you have no chance without a massive trick. Even with superglue, you do not get here, because different Schrägsteine ​​must interlock and these parts are even supporting parts, ie the upper side of the cabin must be placed on it and exercises a certain weight.

Speaking of the cabin: It is completely empty, although there would be enough space to create a nice interior.

The main problem of the manual, however, is that the red-brown parts are displayed in dark brown and you are constantly trying to recognize something. We are talking about at least 3300 reddish brownstones, you can imagine how much the eyes have to work so hard. Without very good lighting and direct light on the instructions, you do not need to start. After all, newly applied stones are marked in yellow.

The last pages deal with the extremely complicated attaching of the ropes for the sails. Of course, it looks much better with ropes, but I’ll give it to me someday if I feel like it. You just get a big roll of black thread and you have to cut your own strings and knot them together. Very annoying and I bet most will just leave it out completely.
But you can not get around with the front sails, because they have to be fastened with the strings. Since you have to try a little as it holds best, the instructions can, unfortunately, be forgotten at the site. I simply tied the cords to the hook parts and fixed them with a drop of superglue, so it is rock solid and looks good. 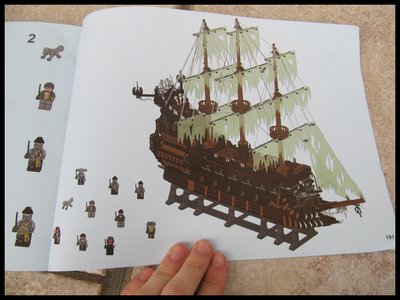 The instructions make otherwise a chic impression, the cover picture with the FD looks good and even makes sense because even in the film, the ship is in a huge vortex. I’m annoyed in retrospect, I have not paid 20 € more to get the ship with cardboard. Whether the box would have arrived in good condition, of course, is the other question 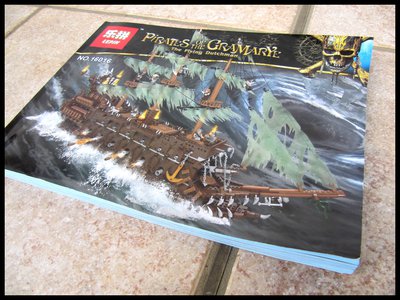 Already at the beginning of the construction one will have to deal with the “lower jaw” of the front ship. The problem here: Although the “mouth” of the ship looks extremely good and is THE unique feature of the Dutchman, but is very difficult to build, because the clamping force of the stones is not as strong as they should be. You have to connect over 26 brown 1×2 plates and I’m so sorry for the purists among you, but without superglue, you have no chance to get that reasonably stable. It’s physically impossible and even if you’ve got it done without superglue after nerve-racking work, the lower jaw will crumble at the latest at the first touch and you start from scratch.
The “upper jaw” is indeed built similar, but surprisingly has better grip and can be built without superglue.

Incidentally, the gray stand is the first construction phase and completed in about 20 minutes. I recommend building the ship without a stand so that you can put more pressure on the stones. 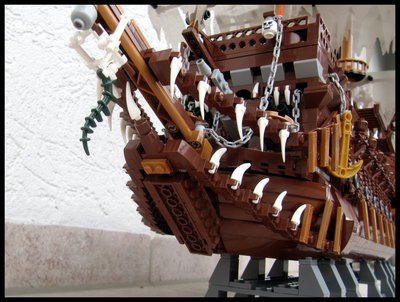 Another problem area is the interior of the ship, because here again LEPIN prunes in a few places the physics and requires the builder that he builds supporting parts on plates, but stupidly just hang in the air and can not bear any pressure , Here you really do yourself a favor, if you rummage a few colorful stones from the Lego site and builds under the plates. In the end, you will not see it anyway, but it makes life easier.
Especially under the cubicle near the prison cells, this is noticeable, so be sure to put extra stones next to them

The ship has a total of 12 large cannons, a few boxes of cannonballs and “mud” on the ground 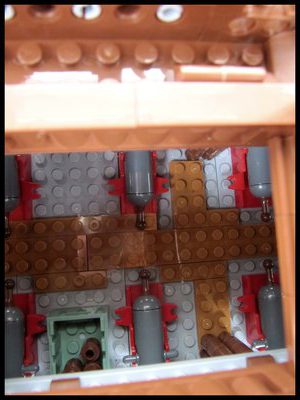 In general, the interior of the ship is quite chic. Problem: Somehow this is unnecessary, as you can hardly look at the interior later, except at the top through the 2 trapdoors. 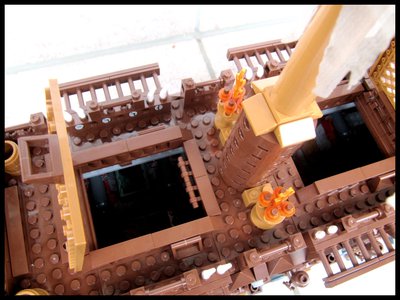 Theoretically, the upper deck is designed so that it can be removed piece by piece to get inside the ship, but here comes the next problem: the 3 masts for the sails.
You can put your last nerve on the line and try somehow to get along with the construction, or you do it like me and makes at crucial key points just a dollop of superglue and everything stops as it should.

If we are already at the masts: The sails are also such a thing. All in all, I’m quite happy with what they look like, but they really do not look high quality and are very thin. A sail was torn at my side, here I had to glue and staple

Unfortunately, a spare sail is not included. There are, to my surprise, 3 different sail sizes. At the bottom a long, in the middle a little shorter and above then small sails. The front of the FD has a very long sail and a small, both in a nearly triangular shape.

The holes where the sails are “plugged in” are unfortunately a few mm too big. If the FD is in the showcase that is not a problem, but when strong wind pulls through the apartment, then you drop the sails. My photos were taken on the balcony with strong wind, you can imagine how funny that was. After each photo, I had to fix all sails again first.
But what do not you do for pretty photos? 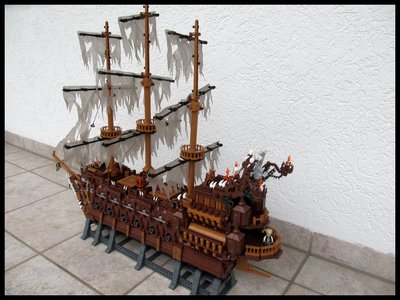 My last point of criticism is the back of the ship. I do not know if it was lack of creativity from LEPIN, cost or time pressure, but the back of the cabin really does not look nice. Although the 2 balconies make a great impression and look chic, behind it gape 2 large holes, where you can just look into the ship and what is definitely not the original ship from the movie.
You can leave it that way if it does not bother me, but I’ve taken some of the leftover stones and made the back side look prettier. 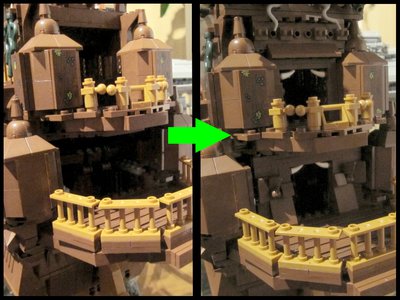 If you finish the FD after 12 to 15 hours at normal speed, you can proudly pat yourself on the back, as you have just finished one of the most beautiful LEPIN / LEGO sets ever.

In front of you is now a nearly 90 cm longship, which is almost 70 cm high (including stand) and weighs about 5 kg.

The ship is really massive and is a total eyecatcher in your booth. Due to the many details, you do not know where to look first. The beautiful side ornaments, the crazy design of the top of the cabin or the cool trill guns in the front of the ship (the hatches are just fake and can not be closed).
The ship has just become damn pretty and I forgive that the hull has no banana shape like the movie model. 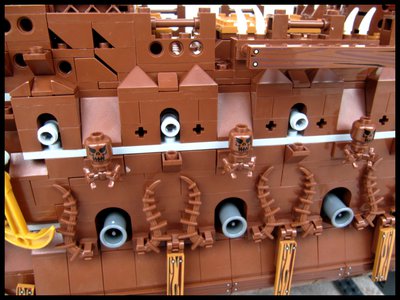 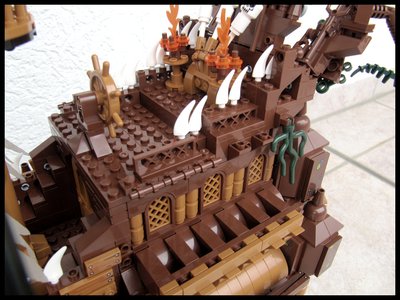 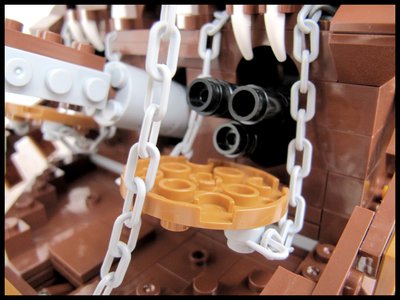 Of course, I should now also face the movie role model. Honestly? There are many parallels, but the ships do not necessarily look very similar. There are certainly some that bother me at first, but not anymore.
Alone, the overall color reddish brown with orange details is completely wrong, because the ship would have to be gray. The sails are wrong because the right FD has enchanted, but completely intact sails. The banana shape of the trunk is missing, as already mentioned, and LEPIN has just made a few details.
But I have to honestly admit: It really does not bother me, LEPIN’s FD still looks spectacular and you recognize the ship immediately. Fortunately, the most important elements of the film’s model were taken very well, such as the big mouth in the front, the ornaments with the faces on the sides, the masts or the balconies. Here LEPIN has done a very good job.

It may sound funny, but the brown color of the boat with the orange details makes it all very “wooden”. From a distance, you might think you have a really small wooden ship standing on the shelf. I would even say that the ship looks really classy and not like plastic toys. 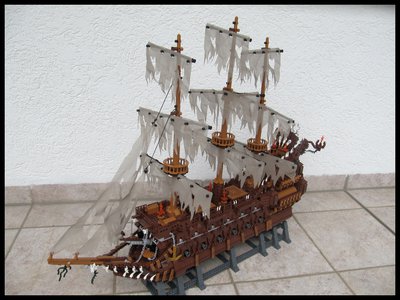 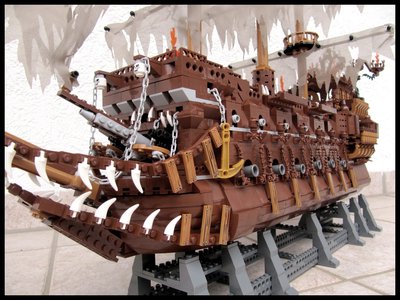 A short summary of the pros and cons:

+ Outstanding price / performance ratio (about 90 € for 3652 stones)
+ All stones are printed, no sticker
+ Impressively large model, but you have to find space first
+ No plagiarism, even pure LEGO fans are impressed with what LEPIN did there
+ Finally the Flying Dutchman! Despite 10,000 supporters at IDEAS, LEGO did not want to implement it
+ A whopping 10 minifigures, 12 cannons (+12 mini cannons) and over 20 skull skulls printed on the ship
+ No missing parts, damaged or spoiled parts, which unfortunately is not self-evident at LEPIN
+ With me were 3 extra bags with another 250 stones, including about 200 brown stones.

– Construction frustrating in places, superglue is indispensable
– Some design weaknesses such as an empty cabin or large holes at the stern of the ship
– Sails could have slightly better fabric quality, ropes for sails only cumbersome to install
– The ship is very difficult to tackle and carry
– Masts and “Maul” should be glued, otherwise crashing the parts again and again
– Davy Jones has a wrong color, he should be dark blue instead of blue

That was very well invested 85 €, such a great and big model you get for his money otherwise hardly. The setup costs a bit of nerves and you have to stick a bit, but the finished model makes up for it because it looks just awesome and makes every other LEPIN / LEGO ship look like children’s toys. Unfortunately, the ship does not look as impressive in my photos as in real, because this impression is very difficult to convey. Live in front of the ship, you’re just Baff of LEPIN’s Flying Dutchman.
Hopefully, LEPIN will continue and bring out such great sets in the future!